You might have to suspend belief in all that is pickling recipes in order to follow me on this. But suspend you must and following me is recommended because these pickles are NOT to be missed.

I cannot claim credit for this recipe. I found it online at a garden forum about 5 years ago. The forum itself was even older then that. It was a discussion about lemon cucumbers, which at that point, was my newest obsession. Everyone was throwing out recipes that were for pickles and relishes… They were troubleshooting about the best way to grow them in order to get the most out of their bushes… It was a lemon cuke lovers meeting of minds and it was amazing.

I read thru the pages of that forum like your average rabid canner. It didn’t take long and I had found it. The recipe. The one I just HAD to try. And I am going to do the right thing and pass it on.

If you don’t believe me, make a half batch or even less. This brine covered 4 quarts plus 8 pints worth of cucumbers with some left over. That’s a lot of pickles to make if you’re unsure. But if you like the idea of a sweet pickle with lots of flavor punched in, this is it. Take a flying leap.

First things first – clean your cucumbers thoroughly. I use my soft veggie brush and cold water.

Get a large bowl and put a whole tray of ice in the bottom. Once I cut the cukes into smaller pieces they’ll go into the fridge on an ice bath for at least 5 hours.

Trim the ends of  each cucumber. Then cut the cucumber into quarters.

I cut the larger ones in half lengthwise before cutting those pieces into quarters.

Anything larger then the cucumbers picture above are chicken food in this household.

Once you’ve got the cucumbers all cut up and on ice, seriously put them in the fridge and leave them alone for a while. After you’ve given them their ice bath, you’ll want to give them another quick rinse with cold water.

Now you’ll need a large pot for this brine, the recipe makes a lot.

Mix this well, but be aware that it will stay cloudy for awhile.

Next, in either a tea ball like ours or some cheesecloth, put the 1 Tbsp of cloves and 1 tbsp of pickling spices. Drop this into the brine mixture right from the get go.

Keep this going on medium heat, stirring pretty much constantly. Because of the high sugar content it will scorch quickly, so keep an eye on it.

Once it gets to a boil, keep it there for five minutes.

While its boiling is a good time to pack your jars and relax your lids. Remember, relax your lids in simmering water, not boiling. If the water is to hot, it can actually ruin the rubber seal.

Once the jars are all packed and the brine has boiled for 5 minutes, it’s time to fill them with the liquid. After all your jars have been filled, cover with your lids, secure with your rims and process in your hot water bath canner for 5 minutes.
After the jars come out of the water bath canner, set them on a towel, covered with another towel for 24 hours. If any don’t seal, put them in the fridge.

I like to let my pickles stew in their juices for at least a month before eating. My dad usually waits 2 or 3 days. My way makes for more flavor saturation, my dad’s way means yea pickles. 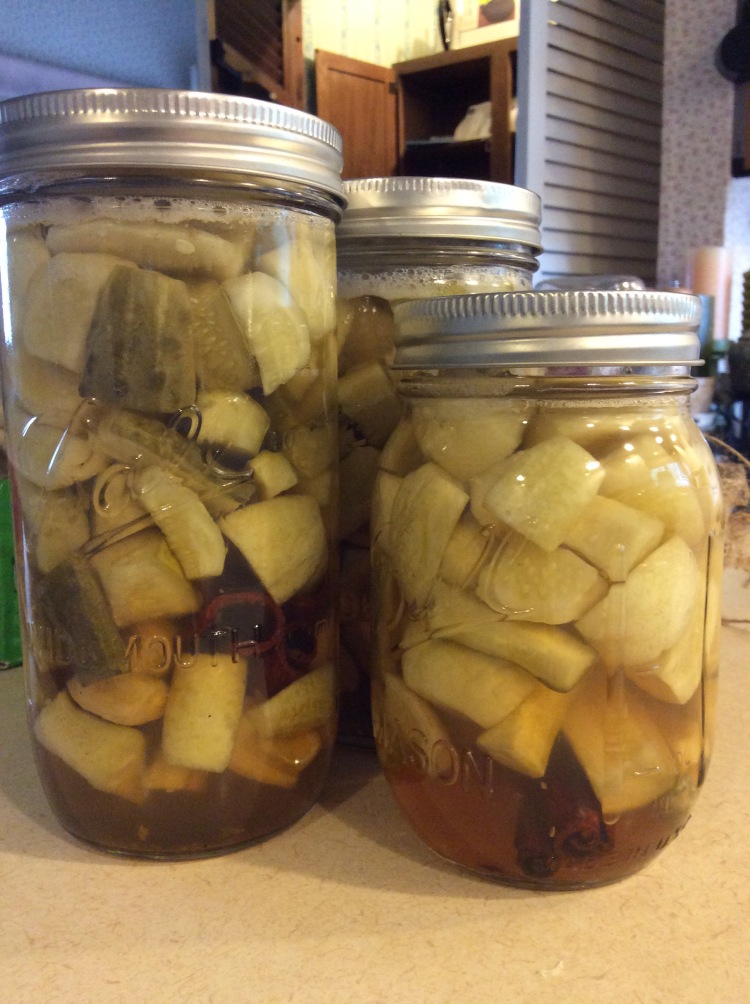 So that’s that for this blog. We still have lots of pickles to make, but now it’s apple season here in Maine. And that is what’s going on for next time. It’s time for another Maine adventure, and it’s about to get real. Real foragie. Because we don’t pay for apples. Nope, we go Apple hunting.

But that’s for next time.

Until then, have a wicked good day.