This is the second in our “Cost of” series- a bunch of blogs I am compiling to record the real cost of growing our own food, running our homestead/farm startup, etc. Today’s topic is PIGS!

Piglets – This is a time of year thing- spring piglets are between $75 and $125 each. We purchased ours for $100 each for a total of $400. We’ve seen fall and winter piglets for $30 to $75.  They were 8 weeks old, so weaned properly, already weighing around 40 to 50 lbs. They had their worm shots, teeth chipped and also the boys had been fixed. This is a hot topic for debate, based around the idea of “Boar Taint”, which I will not personally be addressing here, but you can find out about it from this source.

Also, have a way to get them home. We already had these dog crates- I know they look packed in there, but you don’t want them moving too much while being transported.

Fencing – We had nothing for these pigs in the beginning as we had never run electric fencing before. But on a homestead, all fencing is a worthy investment. We went with 4 strands of woven poly wire, a solar panel good for a 5 mile radius, and a mixture of wood and plastic posts along with using some large spruce trees because they were there. We also had to buy plastic insulatars for the posts/trees , heavy duty metal rods for grounding, insulated wire for attaching to the grounding rods, neutral plate connectors, spring loaded insulated  gate handles, etc. We had to buy things from two different stores, and we had a ten percent of purchase coupon for one of them. We ended up with a 40’x70′ (ish) pasture. This was a good size for the 4 pigs we had. They dug it up pretty well, and there was no smell except after a particulary hard rain.

Shelter – For spring pigs, being raised thru the  summer, you really don’t need much of a shelter. We went with a repurposed truck cab, which they quickly pushed all the windows out of. So, free, but only good for a single season, which we don’t care for.

Supplies – We had to buy a water bowl and we ended up with 3 food buckets so they wouldn’t fight so hard to get to the feed. We also had to buy iodine and a spray bottle at one point because of some minor scraps. We sprayed the iodine twice a day to keep the flies out, but pigs are fast healers, so we didn’t have to do it for long. This is subjective obviously. We could have saved money by building our own feeding trough, and medical supplies are on an on need basis for something you aren’t keeping around for long term.

Slaughter – Our butcher is NOT USDA approved for resale so his prices are pretty low honestly. $45 per pig for the initial kill, .45 cents per pound for packaged meat back to you and $1/lb for any smoking you want done to the meat. With four pigs to butcher, that’s $180 just for the kill. We got back 780lbs of packaged pork, and we only had  93 lbs smoked. The smoked meat (pretty much the bacon) cost $1/pound for a total of  $99 (there was a delivery charge) and the rest cost $532.35.

We also built transport cages, which ran us about $50 for a total of 4. Then, when the cages failed, we rented a trailer for $40. We also had to make three trips, one to drop off pigs, and two to pick up the meat. So around $30 in gas.

So adding all these costs together, we ended up with pork that cost us $3.65 per pound.

This may seem like a bit much since we didn’t technically pay ourselves for labor/time, but we genuinely enjoyed what the pigs brought to the homestead. Not just the meat, however good it is. Also the best garbage disposal you can own as far as food waste, the grins people would get on their faces as they came running to the fence(looking for food I’m sure-doesn’t matter tho, because people loved them), the feeling of accomplishment we have after doing this. 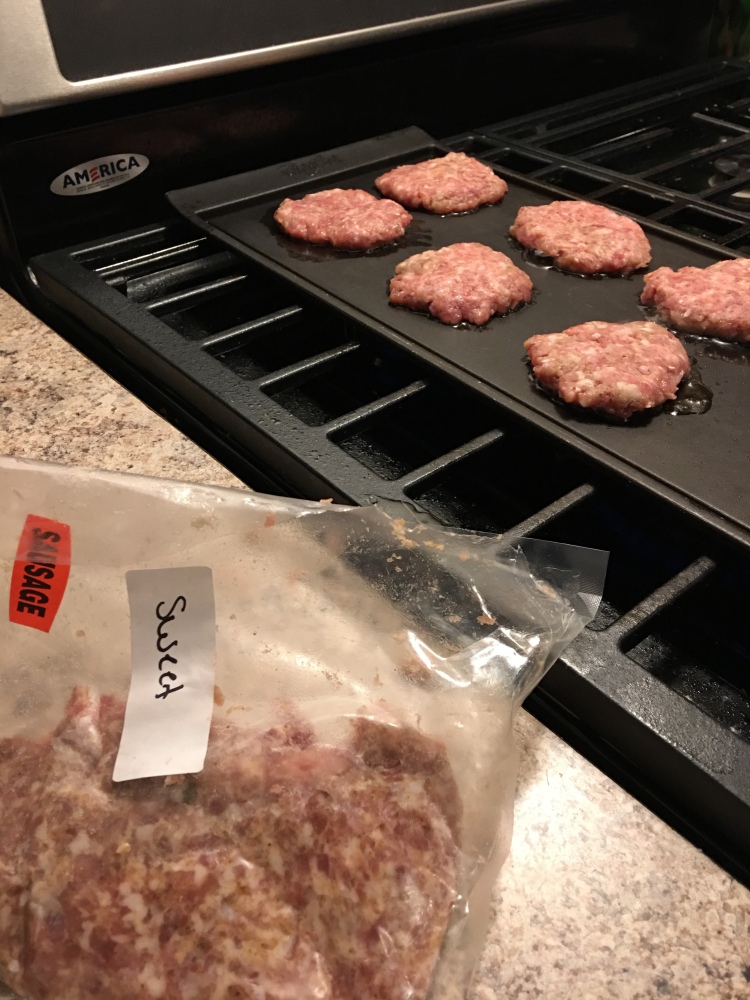 The fence was an investment in our homestead as well, that we will reuse for as long as it works, so this cost should be averaged out over the course of several years. The water and feed buckets are the same. Spread those costs out over the course of 5 years or more and it drastically reduces the price per pound.

If you wanted to get really picky, we also spent $450 on a new 19.2 cubic foot freezer to hold all our pork, but we figure that freezer should last a good 10 years or so, also being used for other food from different harvests. So for the sake of this blog, we did not count that as a cost.

So there you have it. We could have done a few things differently to save ourselves a bit of money, but for the most part, we are very happy with the total outcome of our first time raising pork. Now, we just need to figure out how to use it all before the next year comes around.