The dream- To have a self sustaining homestead; orchards, berries, herb & vegetable gardens, meat, milk and fiber producing livestock, honey bees, hay fields, off grid cold storage and even a walipini or two for growing fresh veg in the winter time…

The only real way to accomplish all this is to have a severe amount of acreage behind you and that dream. Clear acreage.

When we  first settled onto our little slice of Maine Heaven, we thought we were looking at clearing approximately 14 acres of forest, which in our minds, we could do ourselves over the course of a few years.

We had a survey done, for multiple reasons, and what we thought was 14, was closer to 60(a combination of the original plot being improperly split between heirs, bad record keeping by the town, a line of owners not knowing what was really there and a bit of luck I guess)  It was the best money we ever spent, 5k later.

But this also meant that realistically, we would never be able to clear that much forest on our own, and still be able bodied enough to turn it into our dream homestead. So we hired a woods crew to come in and start cleaning it out. Incidentally, the main dude is the same guy that we adopted our original 7 alpacas from.

We are several months in, and boy is it a lot different looking back there. We seriously went from a forest of spruce, pine, cedar and whatnot, to just keeping some birch, maples and the wild apples growing around. Birch, so we can inoculate them with chaga mushrooms, maple for tapping and apples for the potential animal food. We also opted against a complete clear cut, for two reasons. Some of the trees are worth very little at this point because of the economy or their size. Also, it would have been at a cost to us to clear it completely. We’d rather make a little money on this venture (help pay for that survey we had done). 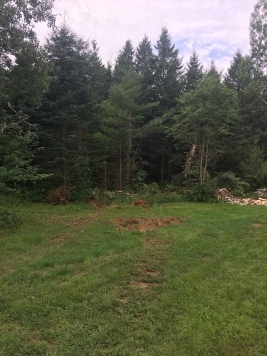 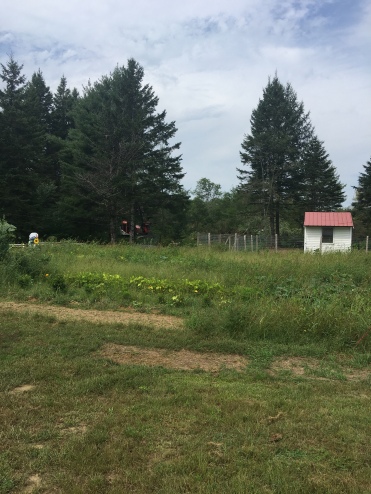 Some before pictures, just from the forest line. I didn’t venture into the actual treeline as our toddler is very quick and I was very pregnant. 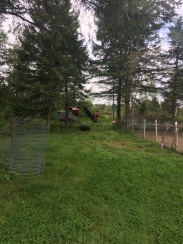 These were from right before the cut, Izzy helped her dad put up the notification sign and I grabbed a couple pictures of the main machine before he started cutting. Izzy enjoyed watching the machine, but did not enjoy the noise so much.

This is out behind the alpaca fence area in the immediate aftermath of the first cut. We had previously cut some trees ourselves, but this was a whole lot faster. 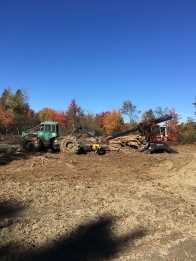 They’ve actually hauled 8 truckloads out already and we’re looking at least another ten or so. And that doesn’t include the bonus pile of cedar tops that he left for us for fence posts. That right there is going to save us some serious money over the years.

The property is narrow and long and oddshaped, so its going to be next spring before they’re done completely. But after that we’re cleared to go ahead with stump removal and then onward to reaching our goals.

Its been 3 years of hard work getting to this point with this particular piece of land, and if I’m honest, we’ve been working towards this dream for almost a decade. It’s rewarding to finally be looking at accomplishing even more then we already have been able to on the acreage that was already cleared – both meat and egg chickens, alpacas, pigs, gardens, strawberries, a home and a work shed with attached greenhouse…. just think of all we will be able to do on 10 times the amount of space!

This is what the back end of our property looks now, as of early November. Its a pretty amazing difference to behold in person. The pictures just can’t do the change justice.

It was a pretty simple process for us-

1. The survey is a good place to start.

2. Use the survey to mark the boundary lines

3. Hire a company to cut and haul

4. Notify the state of intent to cut

6. Sit back and enjoy the sounds of heavy machinery for a few weeks- because it sounds like a lot of things. None of it peaceful.

7. Don’t forget to claim any money made on your taxes. 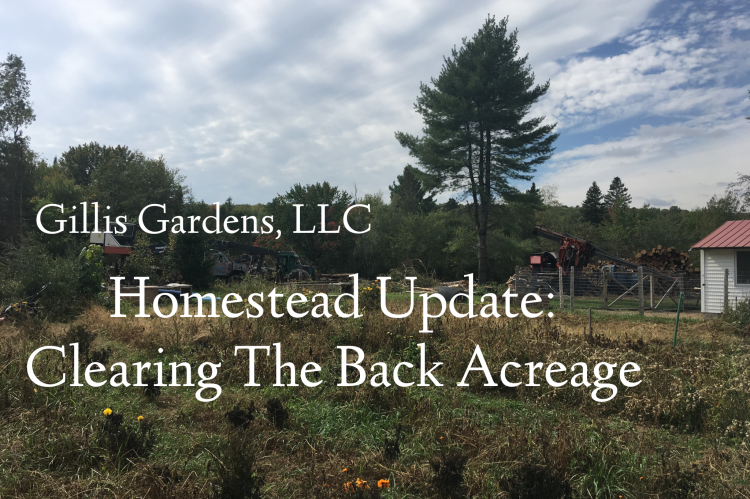 3 thoughts on “Homestead Update: Clearing the Back Acreage”