We started off the month with a bang and drove to Houlton for chicks– it’s been pretty awesome to have the little gals(fingers crossed) around.

I’m still thinking of getting more potentially. We are now selling our eggs thru the local (more then a) hardware store, Dave’s Hardware.

We are already getting up to 6 dozen a week from our current flock of 15 hens.

(FYI: In the state of Maine, as long as you have under 3000 hens, you don’t require any licensing to sell eggs- just follow some simple guidelines and think about getting insurance. Another good reason to move to Maine)

Early in in the month we had a rather stressful day with Izzy- she had all her baby teeth capped. She has had chronic teeth problems since they started coming in, and in the last year she developed a lot of cavities up in her gum line. Her pediatric dentist cited her as a case of genetics, as she is not allowed things like soda or candy. She was a champ tho. MrGillis had to go in without Issac and I tho because the hospital had put a flu ban in place- no one under 1 year old allowed in unless a patient.

MrGillis worked on the floor in the shed’s front room. This was NOT originally the plan for this winter, but the leaks causing all the damage made us reevaluate what our order of projects needed to be. It’s time to focus our energy on leveling the building and giving it a new roof.

He also put in a lot of taps for maple sap- like I’m talking almost triple digits. This guy. Maple syrup is kinda his job(I help with the canning), and he just goes bigger every year. Although, disappointingly, it has been a very slow start to the season. We have managed to can over 2 gallons – wish us luck to reach our goal of ten.

On a side note- we now have TreeSaver Taps and 5/16″ line available for sale, either individually or in packs of 25.

We’ve so far boiled down and canned a little over 3 gallons- we were shooting for ten or more but the season has been really wonky. It started super late and now it seems like it’s going to be over with quickly.

Issac turned 5 months and we started solids- with a sort of crappy beginning. We decided to start with peas, and the poor child is, I am not kidding you, allergic. Within a few spoonfuls, he went from curious to straight up fussy. We couldn’t get him to eat more then a teaspoon- and all that afternoon he was fussy until about 3.

Supper time rolls around, we roll out the peas again and within a few bites, he is fussy, swatting the spoon away. So we stop and just a few minutes later his cheeks and chin were breaking out!

Obviously horrifying. So we ixnayed the peas and went back to just breast feeding for 36 hours. Then we tried sweet potatoes, and although he was a bit hesitant at first, he took to it like a champ after realizing they wouldn’t hurt him. Then we went to squash and finally gave the poor kid a break from veg with some pear. Then we went back to veg with green beans which he loved. We are still in the testing for allergies phase, but once I’ve gone thru my list of foods to try, we’re switching to baby led weaning, just like we did with Izzy. I plan on Issac feeding himself well before his first birthday, same as her.

The snow started melting very rapidly- we lost over a foot in a week. It’s been a wonderful mix of storms and sun. By the end of the month we still had more then a foot on the ground, but we started with over 4 so its a vast improvement.

We found an incredible sweater machine on Facebook marketplace for 30 bucks! Never been used still in the original packaging! But its so old, it has a VHS tape as its instructional. Thankfully, MrGillis gets given some pretty random stuff as a Propane Tech- including a VCR (as old as me) in good working condition. Which is fantastic, because like your typical kid of the 80s and 90s, I still have a lot of my VHS tapes kickin’ around.

Also on FB marketplace we found a snowmobile- I’ve never really been on one, but we figured that for $650 bucks it was a nice little practical present For MrGillis. He and Izzy have had a blast on it.

Another new item for the store- magnets! I’ve been a hobby photog for some years now, and other then my kids, I love taking pictures of my farm. So I turned some of those cute alpaca and chicken pictures into things! Go on over and check our first 4 out. We have more on the way now.

I also took an hour one Saturday morning to clean out the chicken coop- we normally do deep litter method until May or so, but our chicken hut’s roof leaked due to an ice jam- turning our beautiful deep bedding from a wonderful thing to a stinky awful thing. I couldn’t let my flock live like that. So 5 loads of chicken shavings later, I let her air out and chucked a clean bag. We haven’t had any more substantial snowfall, so now other leaks have presented, but we have another roof to replace this summer it seems.

Another accomplishment is MrGillis taking a day to clean out the greenhouse so that we could start seeds!

He buttoned it up with caulking and plastic sheeting- put in a small propane heater, a couple tables and a grow light. Wa-laa!

He moved my herb plants out there and they are loving it – we also started more medicinal herbs, flowers and some veggies. It’s a wonderful start to the day, going in to check the plants, smelling the fresh dirt, the air warm and heavy. It’s our little slice of summer. 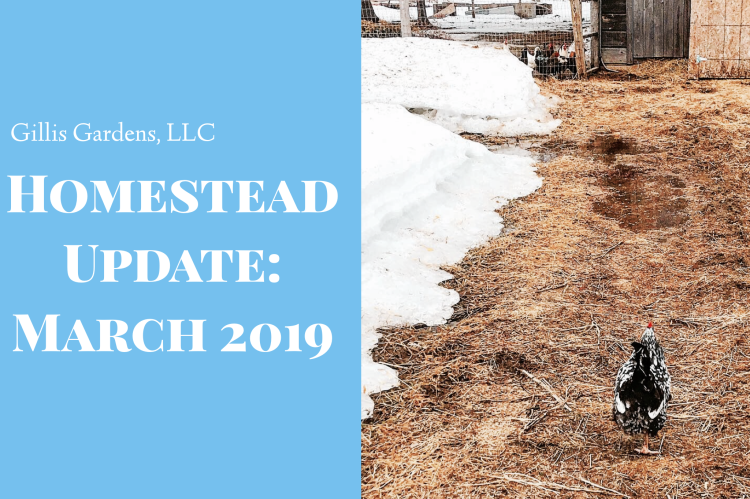