I’m running a few days late with this, but life is pretty crazy right now- and it was a crazy month in April.

At the very beginning of the month I placed our orders for more chicks. This time we are getting our broilers and another 7 pack of layers.

We moved our current chicks out to their new bigger brooder in the shed- I’m pretty sure we have at least one rooster (a silkie) and we might have a second(Orpington). They both have larger combs and waddles then the other ones…. if we do have two, I have to give one up. This means my seven toed silkie may be up for adoption- we definitely do not need two silkie Roos and George is here to stay.

The whole area got hit with an April blizzard on the 3rd.

The next day, we got sun, but also 60 mph winds sustained over several hours- at 3pm our chicken coop couldn’t handle it anymore and tipped over, tearing down fence and giving the chickens a good scare. And the dozen eggs they had laid were good because of all the hay I put in their boxes.

Then over the next week we got hit with two more storms that dumped another 10 inches on us. It was disheartening, as we had a early thaw that gave us hope for an early spring. Was Not meant to be.

We canned Gallons of syrup. Surpassed our first goal of 10 gallons and then the second of an additional 2 for a total of over 20 gallons! The sap just kept flowing, so we kept boiling. We are very thankful for the bounty nature provided us.

It was time to move onto other things tho- late spring things, like cleaning the alpaca house, and making use of that wonderful greenhouse..

We started lots of little seed babies- tomatoes, peppers, cucumbers, squash, herbs, flowers… it was a well needed diversion with the snow still knee high (or more) in many places. The smell of dirt is therapy. As it happens, we will have many seedlings for sale next month.

I also spent a lot of time working with our yarn- skeining it out and getting it ready for festival season. We’ve already signed up to take part in the Danforth Farmers market, which is a every Friday deal and two festivals in Machias in August and September.

Another unfortunate passing of one of our adopted animals- Thunder Bun, the rabbit that moved in with the alpacas in October of 2017. Near as we can tell, he was around 8 years old. He was going strong, until the last cold snap. After that, he went downhill rapidly.

That brings it to a tally of 4 over the entire winter- Thelma the Welsummer hen, after being kicked, Petunia, the chick Thumbalina and now him. It’s been a tough winter for me, honestly…

MrGillis spent some time working on one of our goals- to switch over to tillerless, raised garden beds. He’s been able to build 3 so far.

Which is where we are going to put the 100 purple passion asparagus roots THAT I FORGOT WERE COMING THIS MONTH. Yup. Those arrived two weeks into April and as of today(May 3rd) they are still in the box. Our rhubarb, bee balm and garlic beds have made a beautiful spring reappearance- it’s always so wonderful to see your perennials coming back after a long winter.

Speaking of bee balm- Izzy and I spent a couple afternoons painting our first 3 bee boxes! I am no artist, but I’m proud of our first efforts and we had a lot of fun.

Towards the tail end of the month, we picked up our order of Coast Of Maine dirts- we will have Stonington, Bar Harbor and Cobscook Blends all for sale this summer right at the homestead. We have had to increase prices, to reflect the increase of theirs tho.

MrGillis also spent a fair amount of time putting up new pig fencing and a snazzy new pallet house over in the back area that we’d like them to clear. Bought a pallet of food to save 25 cents a bag.

Then, on April 29th we went to the local dude we buy hay and piglets from and brought home 4 piggies. Got them set up in a house and some electric fence, which leads us to now. 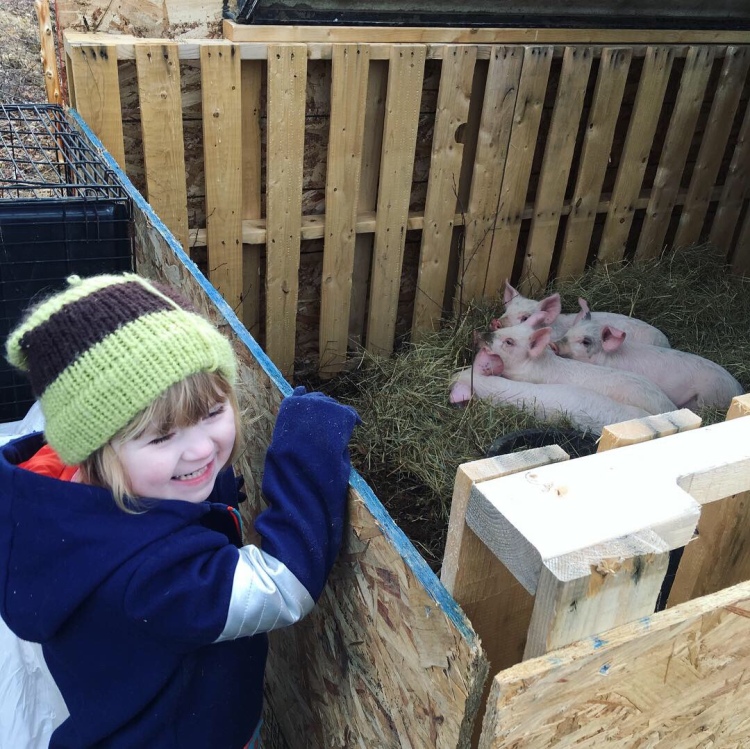 With April in the books, it’s time to start our May project list.

Until next time, have a wicked good day. 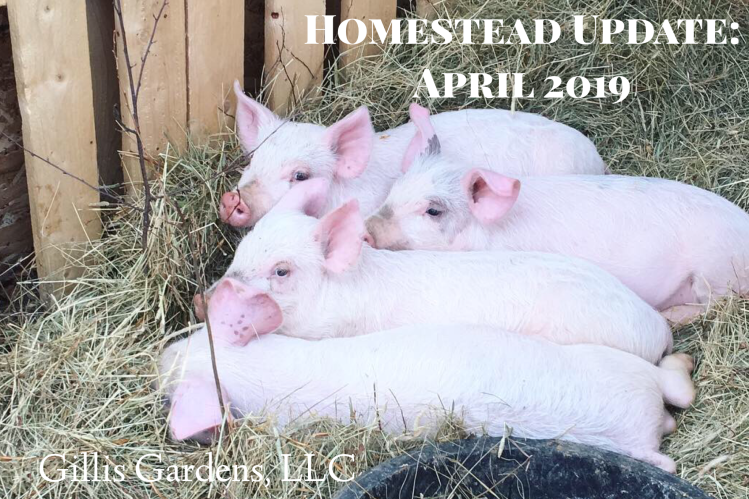 One thought on “Homestead Update: April 2019”