Goodness. Where to start?

The last we left this was a few weeks ago, with lots of mundane crap work and a couple small setbacks.

So, since then we’ve had a plumber come by and actually turn off the water to the kitchen. He took out the old sink, installed a rubber hose for me to get water for the chickens, unhooked the old water heater…. And that was just in the kitchen. Underneath, he cut the drain from the shower stall, and also unhooked and pulled out the piping from the shower head and controls. 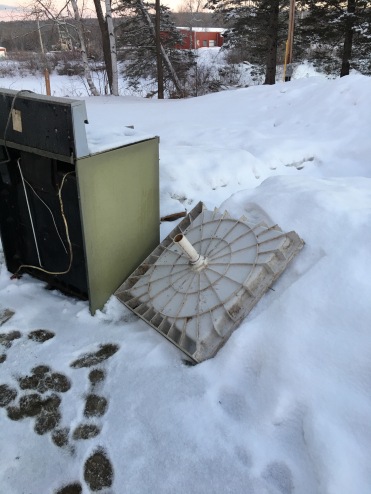 I took the shower stall floor out myself, because I wanted to conquer that troublesome piece of plastic. And I did. Ha.

A few days passed and the hubby had time to go in and start tearing up some major floor. 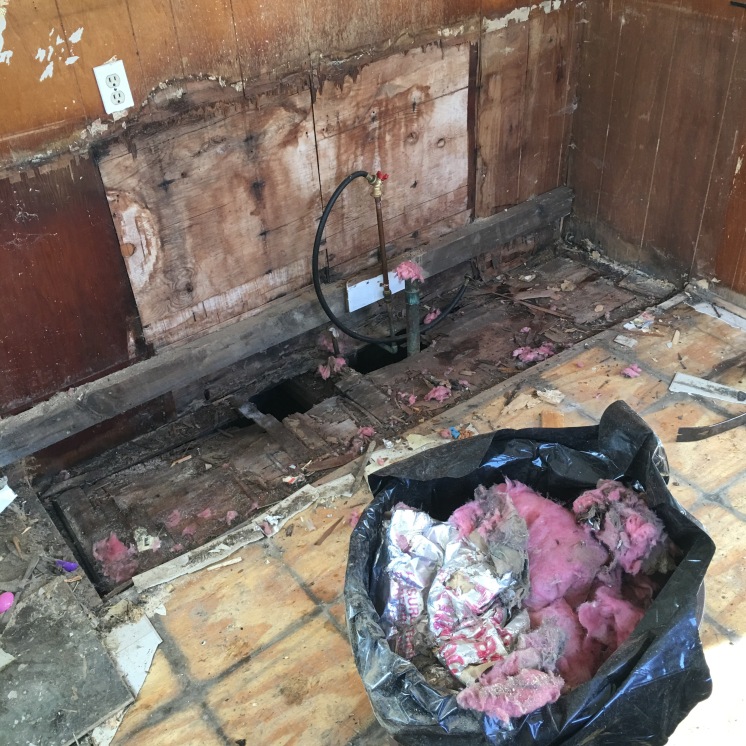 Yup. That there folks- That’s rot. Lots and Lots and Lots of rot. We are pretty pfffffted at this point. We now are looking at finding some floor joists and actually getting the house jacked on the kitchen side come next month. We’ve already contacted a local handyman type to help us out. Here’s hoping he’ll take some pickled eggs and maple syrup to soften the blow of the bill.

So, our next step is to drain the water heater tank, rip up everything we can get our hands and tools under and… tear out the walls and floor to my chicken hospital at the same time, because when you discover an infection, you don’t just put a bandaid back over the top and hope for the best (that’s my hubby talking for a second… Its kinda like bumblefoot in my mind. We wouldn’t leave a chicken like this, we cant leave one of our buildings in similar condition)

So, we had to put a halt on that project for the rest of the week until time becomes more available.

But that’s ok because we had a crap ton of other work to do. I don’t know if I’ve ever really made this clear, but my hubby and I both work full time jobs on top of everything we do here, so monday thru friday we don’t have all the time in the world to dedicate to just our DIY projects.

So heading into the last full week of January, I was concentrating on payroll taxes for two companies, and mrgillis was reconciling the companies quickbooks for the year. Over the week, we did a couple things to get ready for the next big push. Like, empty the water heater so we could get it out of the kitchen. 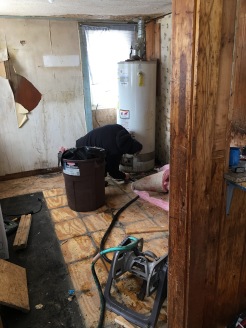 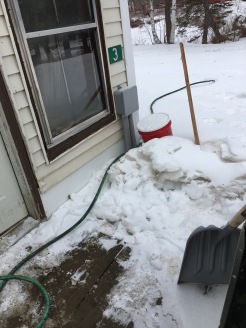 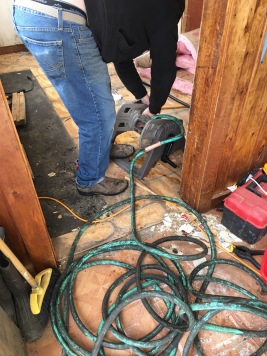 This, should have been a quick job, but of course, as mrgillis was walking by our hose holder, he somehow broke it(I was just kinda glad it wasn’t me that broke the thing we were using, this time), which sprung a leak. We had to unroll the ENTIRE length of hose, unhook it from the hose holder, rehook it back to the water heater and THEN it could drain outside instead of all over our already rotting from water damage kitchen floor.

Fast forward a few days and its saturday morning. We dropped the munchkin off at our babysitters and proceeded to get to business. Said business being to clean out the chicken room and kitchen completely, find somewhere else to stick all that stuff (Yea! More reorganizing!) We also put up some light block curtains to try and keep more heat IN because we’ve been experiencing below zero temps at night. 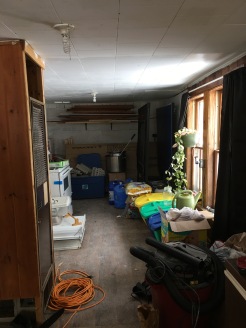 Finally, with everything moved out of the way, it was time to get down and dirty with our bad demolition selves. 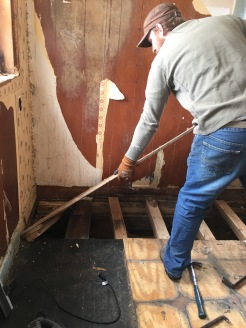 MrGillis, initially wanted me to keep taking nails out of old trim boards. I pretty much vetoed this idea after the first board. Into the pile of trash they went. 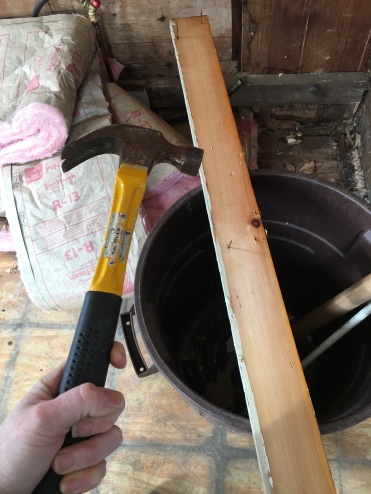 With that decided, we went to town on that kitchen I tell you what. 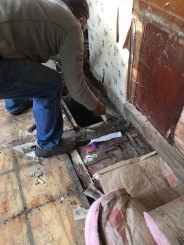 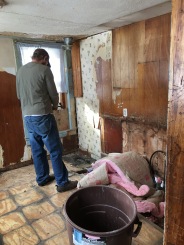 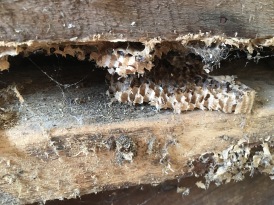 But none of that stopped us- nosiree. – we tore thru that kitchen and even into the what used to be the bathroom and will soon be our chicken room (YEA BABY CHICKS IN LIKE A MONTH!!!) 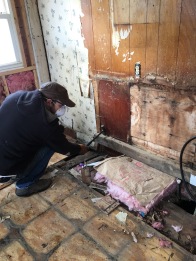 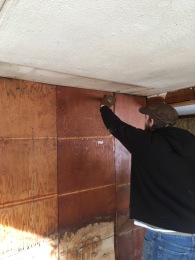 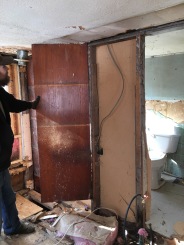 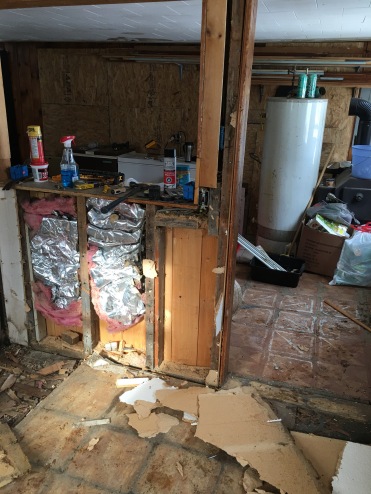 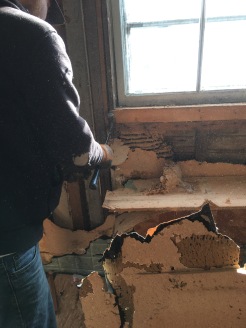 We started into the bathroom walls, and found more Insect Activity Of An Unknown Origin… and EVEN that didn’t stop us. I went thru a stud, because of how rotted it was, and THAT didn’t stop us. We tore up floor, down to rotted joists. We started in on the bathroom floor, and had to stop up at the toilet because, oh yeah, MORE FRIGGEN WATER DAMAGE.

Fast forward a few days, and mrgillis talked to the guy helping us jack the building. He wanted to get another opinion, and funnily enough Charlie has worked on this place before(his sister too, actually. It’s a small town.) After some inspection of the rot and also the sinking floor, he said that it would be some work, but it would be worth it.

So that is where we are currently at. Heading into February, with an even longer list of things to do before sap starts flowing and baby chicks start landing. We have pretty much the next 4 weeks to get our acts together… so off we go to work again…

Until next time, have a wicked good afternoon.